That’s right.  Indianapolis Mayor Greg Ballard proclaimed May 20, 2015 as “David Letterman Day” in honor of the city’s most famous resident who is retiring after 33 years as host of his ingenious late night talk show. As a resident of the area, I couldn’t be more pleased that Dave is getting the recognition he deserves – not only from Indiana, but from fans coast to coast. 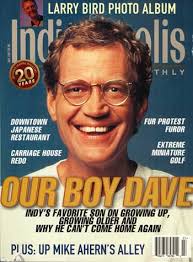 It’s been so much fun watching video clips from the past 30 years of Dave’s shows and witnessing the emotional well-wishes from comedians he influenced such as Jimmy Kimmel, Norm MacDonald and Ray Romano. Warning: Make sure you have an ample supply of tissues.

The tribute I most identify with is a commentary from CBS Sunday Morning delivered by comedian and fellow Hoosier Jim Gaffigan who claims in his brilliant essay that Dave’s retirement is “causing him to have an identity crisis and he feels like he is being abandoned because somehow Dave shaped his entire adult life.”

“As an awkward teenager growing up in Indiana, Dave represented a beacon of hope…He was and still remains the Hoosier who made good.  Dave didn’t just leave Indiana and succeed – he brought Indiana with him and succeeded wildly…Dave made it OK to be funny, smart and Midwestern…”

There was a time when Indianapolis was known as “Indy No Place.” My mother who has lived in Indy her entire life, proudly makes it known when a celebrity on television is from Indiana – as if it is her/our personal connection to fame.

My mother is one of Dave’s earliest and biggest fans and was a regular viewer of his short-lived morning show in 1980, The David Letterman Show. As a double-bonus, another Hoosier, Will Shriner (son of Hoosier humorist Herb Shriner) was on Dave’s morning show. I was a Senior in high school when the show aired and remember my mother cackling while she was folding laundry and screaming, “You have to watch this – it’s hysterical…Dave is from Indiana!”  (Have I mentioned Dave is from Indiana?)

I was lucky enough to be a college student when Dave launched Late Night. Larry “Bud” Melman was considered a super hero and hours were spent thinking of some sort of stupid human trick that would land us on Dave’s show. Dave’s brand of goof-ball and snark was just what these young humor-starved Hoosier coeds craved – along with a late night Domino’s pizza. (Did I mention that Dave is from Indiana?)

I’ll always regret not going to a Late Show taping when I lived in New York City. It was impossible to get tickets due to the popularity of the show.  Every time I walked past Rockefeller Center where the show was taped, I felt a little piece of Indiana was with me.

Over the years, as my self-diagnosed narcolepsy kicked in and it became too much of a chore to stay awake through the evening news to watch late night television, I lost touch with Dave only keeping up with the occasional prime time special or tuning in after 9/11 for reassurance from Dave that it was OK to mourn and laugh at the same time.

Like Dave, I became a parent later in life and consider parenthood life-changing.  Our children are the same age.  He mentioned on his program that everyone always told him to have kids, but no one ever told him they were so funny. So true. (Do you know Dave is from Indiana?)

My sister-in-law aspired to be a housewife sideline reporter for the Late Show reporting stories of her escapades like the time she was undergoing an at-home EKG as part of a life insurance policy physical when a Jehovah Witness came to the door. That’s the kind of real-life comedy Dave loves. (Did I tell you Dave is from Indiana?)

In celebration of “David Letterman Day,” I was tempted to exchange my typical work wear that consists of a sensible cardigan and wear-ever slacks for a navy sport coat, khaki trousers, black loafers and big, fat stogie.

Instead, I decided to post my own tribute.  You can bet I’ll be watching Dave’s last show with a big box of tissues at bay.  I may even bake one of his mother’s famous pies.

Dave, thank you for all the laughs and for taking Indiana with you on your amazing journey. As I move into my golden years without you on television, I can only hope you take a gig as host of Wheel of Fortune or as publisher in chief of Reader’s Digest.  The world still needs your brand of funny. (By the way, thank you for being from Indiana.)

6 thoughts on “Did My Mother Mention David Letterman is from Indiana?”

Your Comment May Be Better Than Story, Please Leave One... Cancel reply

Behold the Superpower of the Father-Daughter Bond

Listen to Your Mother Cast 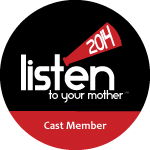 A Year of Blogging – Lois Lane or Crazy Aunt Lena

Error: Twitter did not respond. Please wait a few minutes and refresh this page. 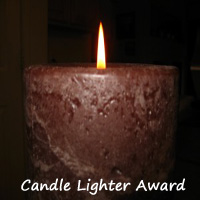 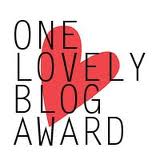 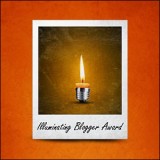